Texas- On December 26, unusually heavy rainfall caused severe flash flooding in Northern Syria along the Turkish Border and in Northern Aleppo. Hundreds of tents were washed away in Atma, Dana, Sarmada and Qah in the northern countryside of Idlib. The area is largely desert and valleys with poor drainage.  The tents are canvas and fixed to the bare ground with dirt roads connecting them. Over 250,000 refugees in these areas have been affected with many shelters, food and water stocks ruined by flooding. Temperatures can drop below zero degrees Celsius at night, which has already led to the death of a little girl. Myriam Al Hussain died due to severe cold on December 17. She lived in the Al-Naser Camp, near Qah town, Northern Idlib. Idlib is already struggling to accommodate millions of Internally Displaced Persons (IDPs) without sufficient resources.

UOSSM urges the international community and aid agencies to release emergency funding to provide adequate shelter, heating, clothing, water and food to internally displaced people. UOSSM anticipates a sharp rise in waterborne diseases as sewage overflows. UOSSM urges water and sanitation aid teams to immediately reinforce camps for flooding and heavy rains.
Dr. Hussam Al Fakir, Chairman of UOSSM Intl.   said, “Life has already been very difficult for IDPs living in Idlib. The flooding combined with the freezing winter has become a perfect storm, and will likely kill many children and the elderly. It is important that we recognize the tremendous suffering these families are going through during the holiday season. Climate change and global warming are now affecting an already devastated county and it is hanging on by a thread.” 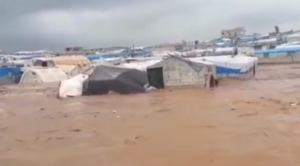 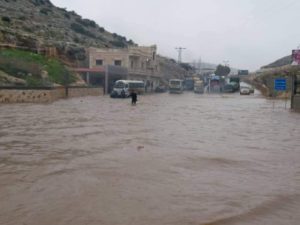 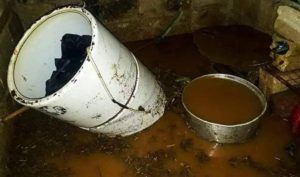